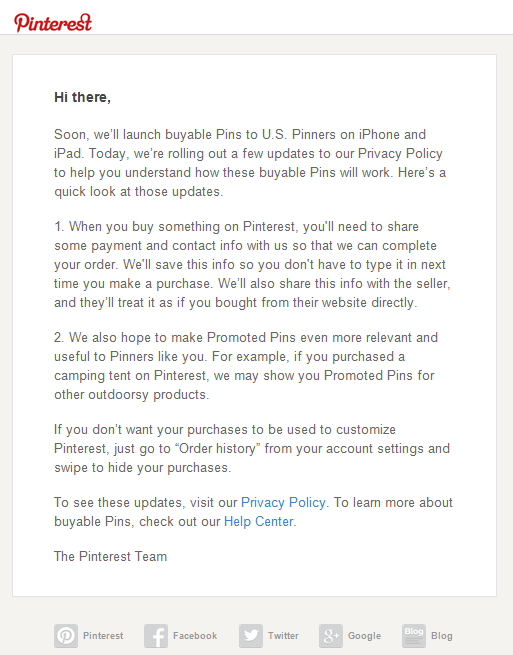 Why is Pinterest doing this? Well, there could be a number of reasons why. I don’t know. I don’t represent them, and I haven’t discussed it with them. I’m just speculating based on my understanding of consumer privacy issues.

First, many companies feel the need to promise their customers that they will keep their customers’ personal information private. Thus, in order to attract more users, they will present their users with a public “privacy notice” which states a policy. In other words, just like a coffee company might sell biodynamic, fair trade coffee beans, so too do some companies feel the need to be what they consider a “good corporate citizen” and be open and honest about what information they are collecting and how it’s being used.

The second reason is that some states require that companies issue a privacy policy. One of these states is California, and the Attorney General of the State of California recently released recommendations for developing a privacy policy. You should consult with your attorney and check your state’s laws.

The third reason is that privacy has become an issue for the Federal Trade Commission‘s Bureau of Consumer Protection. You see, over the past several years (and, in particular, because of the Internet), issues regarding privacy of consumer information have become a source of concern and controversy. So, the FTC has stepped in, and is slowly beginning to play a larger role in punishing poor corporate behavior regarding privacy issues.

And that’s FTC not XTC.