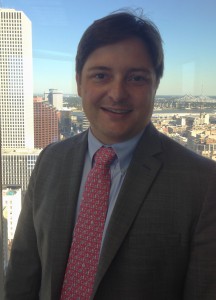 My name is Matt Miller, and I am a former software engineer turned lawyer, practicing patent, trademark, copyright, and technology law in New Orleans, Louisiana with the intellectual property practice group at Carver, Darden, Koretzky, Tessier, Finn, Blossman & Areaux, LLC. However, I still find time for technology (for example, this blog is running on a Debian Linux server I maintain).

I also worked with the “Durationator” project of the Tulane Center for Intellectual Property Law and Culture, creating the logic representation language and accompanying logic engine enabling the site’s detailed analysis of worldwide copyright law. As a result of this work, I am named as a co-inventor on an international patent application.

I have also created several iPhone applications, including including an app version of the Louisiana Civil Code and Federal Civil Procedure for lawyers, as well as the “Buy Save Serve” application for the Junior League of New Orleans. I have experience in PHP, Java, SQL, embedded systems, C\C++, image processing, open source software, web application development, search engine optimization (SEO), internet advertising, and affiliate marketing. In addition, two of my recipes are featured in Crescent City Moons, Dishes and Spoons, a cookbook published in 2009 by the Junior League of New Orleans.

I am licensed to practice in the following jurisdictions: